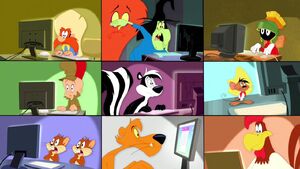 You've Got Hate Mail is the 28th episode of The Looney Tunes Show.

Bugs and Daffy go to a cake store. Bugs buys a whole carrot cake to share with Lola, Patricia and Walter, to which Daffy says that carrot cake is too "cliche" for rabbits. When Bugs decides to get a lemon merengue pie instead, Daffy asks the employee for a sample, only for the cashier to say that they don't give samples. Daffy gets angry and explains that he won't ruin it if he tries a piece, whereas he is hypocritically shoving his hand in Bugs pie. Bugs then “decides” to get the carrot carrot cake after all, since Daffy ruined his pie.

Later, Daffy goes over to Tina's apartment for their date. He tries to talk to her, but he keeps being shushed until she tells him what’s going on: Tina is writing a rude and horrible e-mail to her boss. Daffy is shocked and asks her why she's going to send it, but Tina remarks that she won’t send it, and deletes the email. She explains that it's a way to release her anger, without any consequences.

Meanwhile, Bugs is eating cake with Lola, Patricia and Walter. While eating, Patricia says that Lola has an imaginary friend named Piper, creeping out Bugs. Bugs complements the family’s family photo that they take annually. Lola suggests that Bugs should be in their family photo this year. After repetitive pleading from anthem, he reluctantly accepts. When he returns home, he finds Daffy making a hate-filled e-mail, like the one Tina made. After working on it for several hours, he finishes the email...but to Daffy's horror, he accidentally sends the e-mail, instead of deleting it! He had sent it to everybody he knew except for Porky. A scuffle with Daffy revolving around the e-mail he sent ends up accidentally chipping Bugs' tooth, since he did not want Bugs to see the e-mail. Dr. Weisberg tells Bugs that it will take a week to have the tooth fixed while also mentioning to him on what Daffy said about him in the e-mail he got. Lola is horrified to discover his horrid tooth, and lies, saying that they canceled the family photo, so he can't be in it. He then says he'll be in it, but not before she runs away, trying to beat him to the photo. He then borrows cowboy clothes from Yosemite Sam, as the family photo is a western theme. It turns out that Yosemite liked Daffy's e-mail because it "held a mirror up to [his] soul", and has changed from a hillbilly to a civilized friendly man.

Daffy eventually learns that Tina never checked her e-mail due to her manager doubling her shift and her phone dying as well as forgetting the charger. On the promise that he will send him an email on his feelings of him like he had everyone else Daffy enlists Porky Pig to sneak into Tina's house and delete the e-mail before she gets home. Daffy's idea of sneaking isn't very subtle as he throws Porky through Tina's window so he could unlock the door. At the Rude Ranch, Lola tells her parents that they should hold the picture somewhere else as she doesn't want Bugs' appearance to ruin the family tradition, she explains to them that Bugs won't be coming as he fell down a well. However shortly after Bugs shows up in his car and Lola commandeers the horse drawn carriage that her parents are in, and tries to escape.

When Tina comes home to find Daffy and Porky in her apartment, Daffy hastily tries to explain that he had Porky come over with him to make her dinner, since Porky is a caterer. Tina notices a pile of broken glass next to the window but Daffy insists that she is just tired because because of her long day at work. Daffy tries to buy himself more time to crack her password by convincing Tina to take a bath and relax. He coaxes her into telling him her mother's maiden name, which is her computer password. Moments later he gets into her email and is about to delete the email when he notices a suspicious email from someone named Michael. He opens it and begins snooping through the message coming to the conclusion that Tina is in love with someone else. Talking aloud to himself alerts Tina to what he is really doing and she barges out of the bathroom. Tina then reminds Daffy that Michael is her brother who Daffy had met before (And apparently forgot). She then kicks him off her computer, opens Daffy's email and begins reading it aloud. Daffy sits beside her terrified of what she might do to him, as she reads his message specified to her. It states “I know I’ve said a lot of things about a lot of terrible people, but I’ve saved the terrible-est for my girlfriend, Tina. I’ve known many deranged people in my life, but never encountered the kind of profound mental instability that she possesses. Tina Russo is a psychopath. She may have everyone else fooled, but I know the truth. Why else would the most kindest, beautiful, and intelligent woman in the world go out with someone like me?” She then turns over to a cowering Daffy who is covering his eyes and expecting a beat-down from Tina, and tells him that she loves him, Daffy is shocked and asks her if she isn't going to kill him, to which she says, "Eh, call me crazy." She then inquires about the catering that Porky was supposedly there for, and they turn into the kitchen to see Porky posing as a very unconvincing roasted pig, complete with an apple stuck in his mouth.

Bugs catches up to them as Walter discovers that his tooth is chipped. Bugs bails from his car (which now unpiloted crashes into a tree and explodes into a huge fireball) and fights with Lola over control of the horses carrying the wagon; in the altercation the horses break free and the wagon flies off a cliff and crashes, and the next scene shows all four in the family photo, all with broken teeth and everyone is smiling except for Lola, apparently the only one who didn't enjoy herself, scowling.

Later that night, Daffy accidentally deletes the hate-mail to Porky that he'd promised to send, and since he hasn't sent an apology letter to anyone, Granny arrives at the house and punches Daffy in the gut for his original email earlier that day. Bugs assures Daffy that "Time heals all wounds", just as Daffy had said earlier when explaining how people will react to his nasty messages.

In the final scene, Yosemite Sam is hosting a book club at his home. Surrounded by annoying patrons, he finally snaps, leaving the room and coming back as his old nasty cowboy self. Before promptly kicking everyone out and tossing the books at them for good measure.

Daffy nosily watching Tina write an e-mail, much to her annoyance.

Lola and Bugs screaming in terror, right before they crash.

Retrieved from "https://looneytunesshow.fandom.com/wiki/You%27ve_Got_Hate_Mail?oldid=51458"
Community content is available under CC-BY-SA unless otherwise noted.