Witch Lezah first appears in Monster Talent, when she comes to Bugs' House and asks if she can talk to him for a second. After she is invited in, she asks Bugs if he can help her shy son, Gossamer, make friends because all of the kids make fun of him at school, on account of him being a monster. But, she then asks Daffy to do it instead after Daffy says that another "weirdo" should help Gossamer, due to Bugs having "too many friends". At first he denies, but when she threatens him, he reluctantly helps Gossamer. Later at the talent show, Witch Lezah is shown in the crowd shouting "That's my baby!" and whistling when Gossamer goes on stage, and proudly claps after he sings September In the Rain. At the end of the episode, she thanks Bugs and Daffy for helping, and that she can't thank them enough. Daffy says that in return she can make him have six-pack abs, to which she responds "Stay away from my son" to Daffy, and she walks away.

Witch Lezah asks Bugs if he could watch over Gossamer like a "big brother" figure.

Lezah says that Gossamer called her a witch. (Which she seems to misinterpret or has forgotten she actually is a witch)

Witch Lezah says that she's not always a nice witch, to Daffy.

Lezah reappears in Peel of Fortune, at Bugs' yard sale, but does not have any lines. She was interested in buying a treasure chest toy box, but it is unknown if she purchased it.

Witch Lezah appears in Newspaper Thief where she and Gossamer go to Bugs' dinner party so Daffy can apologize for everything he has done that year, such as crash his car into her minivan, ruin the Fourth of July, Easter, and Columbus Day. Bugs goes to her door to tell her about the dinner party, while Daffy snoops around her backyard, believing her to be the thief. However, a giant eye meets him through a window, sending him running away, screaming. At the party, when Daffy plans a trap to find out who stole his newspaper, she is excited, and thinks it's "one of those fun mystery dinner parties". Later, when Bugs is worried that she'll sue him, she tells him to have a little faith in his neighbors.

Witch Lezah, along with Gossamer also appear in Sunday Night Slice, where they went to Bugs' pizza resturaunt, and is upset that they ordered a cheese pizza, and Pete just gave her a cup of cheese and an IOU, like several of the other customers. Then she asks everyone if they want Chinese food and she uses her magic spell to make everyone disappear and herself, and go to Hu-Nan Palace.

In Muh-Muh-Muh-Murder, she attends Daffy's surprise birthday party at Pizzariba, and is shocked that Daffy thinks that Porky is the suburban strangler.

In Bobcats on Three! she went to Bugs' party, and stood up for Gossamer, when Daffy said that he couldn't have any dessert, since Gossamer is training for water polo. Daffy explains that if she didn't want him to tell him what to do, then she shouldn't have entrusted him in his care, to which she says that she didn't, and had specifically told Gossamer to stay away from him.

The witch made another appearance in You've Got Hate Mail, where she first appeared reading Daffy's insulting e-mail, while covering Gossamer's eyes. She later finds Daffy at Pizzariba, where she confronts him telling him that he's got "some nerve" for insulting her. Apparently, Daffy had said that she wasn't a scary witch, making her furious. He then mentions it again, saying that there's no use for her hat and and wand if she isn't going to do anything scary. She then magically creates an evil octopus on Daffy's head before walking away, while he desperately tries to get it away.

She made a brief appearance in Rebel Without a Glove, where she snapped at Daffy for winking at her.

In It's a Handbag, she was Daffy's therapist, and helped him remember who took his handbag, which was took by the mall security.

She also appeared in We're In Big Truffle, where she asked Bugs to babysit Gossamer, while she went to the Fifth Dimension.

In Gossamer is Awesomer, she told Daffy to get out of her house, when he was helping Gossamer become class president.

She made her last appearance in Best Friends Redux, where Daffy broke into her garage and used her time vortex. She later fixed the chaos he caused, and explained how he needed to change what he had done. 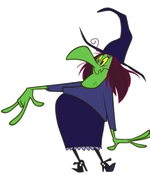 Witch Lezah was one of many people that received an insulting e-mail, by Daffy Duck 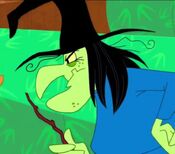