The Looney Tunes Show Wiki
Register
Don't have an account?
Sign In
Advertisement
in: Episodes, Season One Episodes, Episodes animated by Toon City

To Bowl or Not to Bowl

To Bowl or Not to Bowl 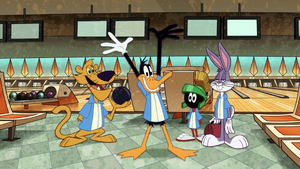 To Bowl or Not to Bowl is the 13th episode of The Looney Tunes Show.

Bugs and Daffy play chess, and Daffy asks Bugs if he has any fours, thinking they're playing go fish. He then proceeds to answer as though playing Clue, and at this, Bugs questions if he even knows the rules of chess. Daffy claims he does, then finally makes a move on the chess board. As the game continues, Bugs puts Daffy's king in check, and Daffy tells him to look the other way. Bugs refuses, noting that if he does, Daffy will flip the board over and claim it was an earthquake. Daffy promises he won't, then tells Bugs to turn around, but as he complies, Daffy does just as Bugs predicted. As he exits the house, Daffy reveals that he has singing lessons, and when Bugs reveals that he has never heard him sing, Daffy gives a demonstration of his singing as he walks out the front door and enters Porky's car as a passenger. In there, Porky claims he feels sympathy for Bugs' failure to join them for their real plans: bowling. At this, Daffy claims that it is because Bugs has singing lessons, only for Porky to point out that he has never even heard Bugs sing.

Daffy and Porky enter the bowling alley, and Daffy orders snacks and drinks. He meets up with the rest of the team: Porky, Marvin, and Pete. As they snack, Daffy enters the team nicknames into the scoreboard. In the order Daffy enters the nicknames, Porky's is "The Pork-inator," Pete's is "The Pete-inator," Marvin's is "The Marvin-ator," and Daffy's is "Poobah, the Grand." Since the names are too long and the scoreboard only shows part of the nicknames, the names read "The", "The", "The", and "Poo". Surprised at this, Daffy deems Porky player four, and the team begins to bowl. As Daffy takes his turn, he tells the team that if they want to win the upcoming tournament, they must step up their game. He then launches the ball down the lane, only to knock down a mere four pins. Regardless, the rest of the team cheers him on, but his rival, Terry, meets him and mocks him. Terry claims that his team will win the tournament, and Daffy laughs at the thought of this, then calls up Porky to bowl. Porky struggles to carry the ball, then launches it down the lane, which goes slowly enough for it to hit the front pin, which tilts back a little bit and swings back, tapping the ball and sending it back down the lane.

As Daffy consoles Porky, Bugs sees him and asks him why he isn't in his singing lesson. While Daffy claims it's because he graduated since he has the voice of an angel, Porky encounters Bugs and asks him why he isn't at singing class. Daffy holds Porky's mouth shut, then asks Bugs why he is at the bowling alley. As Bugs attempts to explain, Daffy slams his mouth shut as well as Pete and Marvin see them and question what is happening. Daffy says that he told them each conflicting lies and that it backfired on him, then covers his own mouth while uncovering Porky's. Porky catches onto the lies and asks Bugs if he is or is not taking singing lessons before Daffy recovers his mouth and uncovers Bugs'. Bugs reveals that Daffy told him he was taking sing lessons, only to be silenced when Daffy puts one of his feet in Bugs' face. Marvin asks Bugs if he could have bowled with the team, only to be silenced when Daffy puts his other foot in Marvin's face. With all four of Daffy's limbs silencing someone and Pete being the only one not silenced, He asks someone to sing something, and Daffy complies by singing while the rest of the team, as well as Bugs, leaves.

Later, Bugs takes a turn and gets a strike. After the rest of the team, sans Daffy, cheers for him, Daffy tells him to meet in his "office," which is actually the bathroom, and demands an apology from Bugs. Bugs asks why he should apologize, and Daffy says that he gathered a group of friends that he thinks are pitiful, which makes him seem like the "cool" one, then chides Bugs for ruining it for him. He goes on claiming that people think Bugs is more noble than him and that when he hangs out with Pete, Porky and Marvin, he is the coolest and that it makes him feel better about himself. As Daffy claims that he does not want them to think Bugs is better, Bugs claims that that is not true, but when Bugs exits, they immediately cheer for him. In an attempt to console Daffy, he tells him to tell the others that he had to go to karate lessons, which Daffy twists by claiming Bugs had to go to a modern dance class. When the rest of the team is disappointed by this, Daffy lifts their spirits back up by buying them nachos by using Porky's money.

Daffy's rival team gets a strike, and Terry reveals that it is courtesy of his newest member, who can bowl a strike with ease, even when not looking at the pins. Surprised with this, Daffy's team leaves the alley and ponders on their ability to win the tournament. Daffy plans on training hard, and tells them to be at the parking lot by 7 A.M. the next day, only to show up at 11:30 while everyone else waited for him for over four hours. When Porky points out Daffy's apparent tardiness, Daffy claims that his tardiness is the first part of training: patience. Since Pete and Marvin have not said anything, Daffy commends them while scorning Porky. Daffy then points out that the bowling alley does not open until noon, then drives off while telling them he will meet them again in thirty minutes. Then, he gives them a lecture about the bowling ball and goes over its definition, then claims it is inaccurate. He then claims that one needs to become the bowling ball and takes it literally by having the team throw Porky down the lane, who knocks over all of the pins. Later, Porky is taken to the hospital, where he is bandaged and put in casts. As Bugs enters the room, Porky suggests that Bugs takes his spot, which is positively viewed by Pete and Marvin, but pondered on by Daffy. Out of hatred for Terry, Daffy endorses Bugs into the team, and as they walk out cheering, Daffy steals Porky's wallet, claiming he will not need it as long as he is in the hospital.

The bowling tournament begins, and the teams are introduced. The first is the Silver Foxes, led by team captain Granny. The second is the Lucky Strikers, led by Terry. The third is Daffy's Ducks, led by Daffy. At the ball return, Terry taunts Daffy, thinking he is scared, but Daffy makes up lies to explain his apparent nervousness. Granny tries to bowl but is very slow to launch the ball, while the other teams compete against each other, with some players earning more points than others. Within those two teams, one member from each team gets mostly strikes, the second respective members knock down four or five pins with each frame, and the rest either are either knocking down very few pins, or not shown bowling. Daffy's Ducks are down by one point, with one throw left. As Bugs prepares his final throw, Daffy sulks at the fact that his teammates apparently like Bugs more than him, so Bugs, in an act of generosity, fakes an injury and gives Daffy the final ball. Daffy takes the final ball but gets a gutter ball, initially resulting in Terry's team winning the tournament.

As Terry's team cheers, it is noted that the pins were not properly set before Daffy released his ball, resulting in him getting another ball. Eager, Daffy prepares for his turn, but Bugs quits faking and is also eager to bowl, but Daffy, out of self-righteousness, wants to bowl, claiming that he needs to win. He points out that he usually knocks down four or five pins and that he only needs to knock down two to win. Bugs allows Daffy to take the shot, and Daffy gets another gutter ball, resulting in Terry's team winning for real. As Terry's teammates carry him, they exit, with Terry boasting about his team's victory and Daffy standing frozen in shock. When most of the crowd and players exit, save for Granny and Daffy, Granny finally launches the ball. It rolls very slowly toward the pins and knocks them all down. Later, Daffy takes another shot and gets yet another gutter ball, much to his dismay. His teammates sit by the lane, and Porky, in a wheelchair, reveals that with enough physical therapy, he will be able to walk within a short amount of time. Daffy grabs Porky's wheelchair and, with Porky still in it, throws it down the lane and finally gets a strike.

"I thought the gang could use some snacks, courtesy of yours truly!"

"Thanks, Daffy!"
"I took a twenty out of your wallet."

"We couldn't have asked for a more generous team captain."