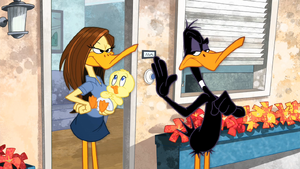 That's My Baby is the 16th episode of The Looney Tunes Show. fa

The episode begins at Tina's apartment complex with Daffy standing on her porch. After ringing her doorbell multiple times, Daffy notices Tina holding a baby and believes she had a family with someone else and dumps her, until she explains to her boyfriend that the baby is her sister's son and that she's just babysitting her nephew. Daffy takes back all the stuff he said after hearing this.

Soon, Daffy is home watching television when Tina rings the doorbell, in a way Daffy did earlier in the episode. It turns out Tina had to take over someone's shift at the Copy Place and needs Daffy to watch Zachary, the baby. Daffy makes up excuses until he mistakenly agrees to watch Zachary. After playing a terrible song and trying to feed Zachary clam juice, Daffy gives up and watches television with the crying baby until Zachary is interested by a trailer for the movie "Marty the Whale", starring Marty the Whale. Instead of taking Zachary to see the movie, Daffy takes him to a war movie which upsets Zachary more. After Daffy is told to leave the movie, he meets a mother who suggests a Mommy and Me class. After going to many classes, Daffy's motherly instincts kick in and soon when they meet Tina at the Copy Place, Daffy refuses to give up Zachary and begins criticizing her about taking care of Zachary.

Meanwhile, Bugs and Porky are eating lunch at Tutty's, when a bubbly waitress convinces Porky to buy "Spinach Artichoke Poppers". Bugs tells Porky that he was given an upsell, but Porky buys unneeded appetizers. Then while buying ink at Ink Inc, Porky gets an "Ink Warranty", even after Bugs convinces him that he is about to get another upsell and mocks him on the way out. Later, when the car breaks down, a tow truck worker convinces Porky to join a club and Bugs acts sarcastic about getting it, but Porky still gives in to the upsell. Then at the Car Rental Shop, Porky buys an Mini Van even though he has spent large amounts of money. Porky then finally convinces himself not to fall for another upsell, but when the cashier offers him insurance at an affordable price, Porky declines, even with Bugs telling him to get it.

Meanwhile, Tina and Daffy are at the park with Daffy criticizing everything Tina does to Zachary, the baby. Then while the two are fighting about Zachary, the stroller carrying Zachary rolls away, unnoticed by the pair. When they finally realize it, the stroller is heading toward the highway and Bugs and Porky driving down the road towards the stroller. Tina and Daffy chase Zachary while Bugs and Porky scream in terror. Then, Porky turns the car suddenly and crashes onto the park statue. The stroller hits the curb and sends Zachary flying until Daffy makes a heroic catch and saves the baby. Meanwhile, Porky realizes he should have gotten the insurance.

Soon, Tina's Sister picks up her baby and when she leaves, Daffy tells Tina that he wants to have a family with her, as he knows now he wants to be a mother, then decides to become a famous frozen yogurt seller. In the end, Bugs ironically gives into a sale from Speedy Gonzales in Pizzarriba.

Porky decides to get the lava cake for dessert.

"Aww! What a cute little face!"

Bugs is exasperated with Porky being roped into getting an ink warranty.

Marty the Whale tries harder than other whales.

Daffy and Zachary at a movie that Zachary doesn't want to see.

"Free ten dollar stickers! Gee! Where do I sign up?" Oh, by the way, he was being sarcastic.

Porky ignorantly signs up for the tow trucker club.

Daffy doesn't know the words to Itsy Bitsy Spider, does he?

Almost. Next time, try the other side.

Not quite the way you tuck a baby in.

Uh...no. That's not how you change a diaper.

Daffy shakes the rattle, much to Zachary's delight.

Daffy gets better at being a parent.

Daffy gives the Zachary his blanket.

Porky and Bugs crash into the park statue.

Tina and Daffy have a moment with Zachary.

Bugs gives Porky a knuckle sandwich for not getting the insurance and because he's already bruised.

Ms. Russo picks up her baby, Zachary from Tina.

Bugs gets a sale from Speedy.

Retrieved from "https://looneytunesshow.fandom.com/wiki/That%27s_My_Baby?oldid=50933"
Community content is available under CC-BY-SA unless otherwise noted.