Spread Those Wings and Fly 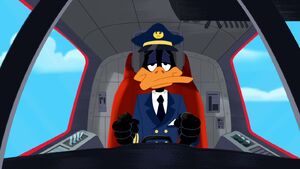 Spread Those Wings and Fly is the 40th episode of The Looney Tunes Show.

Yosemite Sam arrives and takes Bugs' television to impress his date because his own one is very old. Bugs declines, so Sam asks for Bugs' Nobel Prize, only for Bugs to escort Sam out. Just as Bugs closes the door, Daffy stages a photo of him receiving a Nobel Prize, only for it to go largely unnoticed when he uploads it. Porky arrives at the seminar Daffy agreed to go to with him, which is of a motivational speaker named Wieb Lunk. While Porky is motivated to listen to the speaker, Daffy notes that he came only for free coffee but ends up being enlightened nonetheless. He then aspires to become a pilot, then tells Porky to back off, thinking he is being unsupportive. Porky, however, is just stating that Daffy is taking the title of the novel, Spread Those Wings and Fly, too literally, thinking it is a metaphor to live boldly and take risks.

At home, Daffy tells Bugs about his aspiration to become a pilot while drinking Lunk Formula, which is claimed to increase brain function. He then threatens to cut Bugs out of his life just as he did with Porky before watching a Wieb Lunk DVD. Afterwards, he listens to an inspirational tape while sleeping, then dresses up as a pilot and prepares for his job but finds the front door open. Bugs finds out that his Nobel Prize has been stolen and instantly begins pounding on Sam's door, only for Sam to deny possessing it. Later on, Bugs calls for a replacement Nobel Prize, and Daffy notes that he could not fly a plane because he failed the physical and has to retake it the next day. As Daffy goes to sleep, Bugs catches Sam with a shovel and becomes suspicious, prompting Daffy to tell Bugs not to be so paranoid.

The next day, Bugs finds the front door open and his television stolen, then calls the cops on Sam, only for him to reveal he is a victim of theft as well when his cowboy boots are stolen. A skeptical Bugs questions if Sam stole his television, only for Sam to deny the claim and frame Bugs for stealing his cowboy boots. The cops leave as Bugs and Sam continue arguing, noting that they will watch each other like hawks. Meanwhile, Daffy is flying a plane simulator but crashes because he is not familiar with the flight instruments. He then insists on flying a real plane, but his trainer notes that he had nineteen consecutive crashes and feels he is not meant to fly a plane. On his way out, Daffy finds a plane and attempts to fly it, causing major discord and damage to the plane and one of the simulators.

Bugs and Sam continue watching each other before Bugs goes inside to find Daffy watching his Wieb Lunk DVDs. Daffy admits that he was expelled from flight school but vows never to give up on his dreams, then disguises himself as a flight attendant. On the plane, one of the flight attendants gives safety instructions while Daffy gives demonstrations using a seat belt but tangles himself in it. He then goes on to do his job and tries to leave when the flight is over, only to learn they have to stay on the plane for the flight back to California. After the flight back, he returns home, exhausted, then notes that he has to go to Phoenix and Boston the next day.

Bugs is woken up in the middle of the night by a commotion and finds that his laptop is gone. He rushes over to Sam's house, where Sam reveals that his record player has been stolen. After Sam slams the door on Bugs, he sees Daffy sleepwalking while carrying various items and listening to more advice, which encourages him to steal what he pleases. An enraged Bugs shakes Daffy upon hearing this, and the next day, forces him to return the things he stole. While Daffy thinks it was a dream, Bugs points out that it was not a dream and that the tapes he was listening to encouraged stealing. Daffy returns what he stole while Bugs apologizes to Sam and gives him his replacement Nobel Prize.

Bugs, Daffy, Sam, Mac and Tosh, Lola, Speedy, Tina, Pete Puma, Granny and Witch Lezah are gathered around Porky, who sings and impresses everyone. Later, Daffy flies a remote-controlled helicopter, then passes the controls to Porky, who crashes it into a pond.

Daffy enjoying his food, with the other flight attendants.

Retrieved from "https://looneytunesshow.fandom.com/wiki/Spread_Those_Wings_and_Fly?oldid=50956"
Community content is available under CC-BY-SA unless otherwise noted.