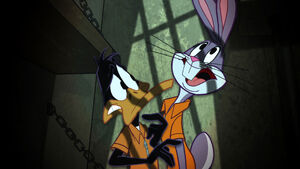 Jailbird and Jailbunny is the third episode of The Looney Tunes Show.

Bugs, Daffy, and Porky are visiting the Grand Canyon when Daffy, being the moron that he usually is, absentmindedly throws a soda can into the canyon and is promptly arrested by a park ranger for littering on federal property. He then tried to cover up the crime by saying his name was "Darvin Andrewson", only for the officer to take this as a more serious crime. Rather than pay the fine of $50, Daffy contests the charges and uses the court hearing to try to pin the littering on Porky, saying that he stutters because he is lying, only for Porky to abruptly leave the stand. He then tried to pin it on Bugs. Daffy calls him a hostile witness and liar, but Bugs doesn't respond well to Daffy’s accusations and the two of them start spitting soda at each other, until the judge finds them contempt of court and sends them both to an Alcatraz-style, maximum security prison. Bugs quickly takes a liking to his new digs, because other people cook for him and he can insult the other inmates without fear of retribution. Daffy on the other hand does not cope well, frightened by the horrible food and other quirks. Porky comes to give them a cake, which Daffy thinks is a file that he can escape with. Daffy tears apart the cake to find it, but is furious that Porky didn't put an escape weapon in it, and shouts out his feelings. The guards then take him away.

Later, Bugs and Daffy are breaking rocks as part of chain gang, when Daffy inadvertently insults and angers his fellow inmate Crusher, by saying that he looks like a Neanderthal and that he's stupid. Crusher then chases after him and Bugs in an attempt to physically harm them. They manage to escape by jumping off a cliff and into a river. Still shackled together and now on the lam, Bugs and Daffy dye themselves blonde to change their appearance and get jobs working at a diner in the middle of nowhere, even though Bugs wants to turn themselves in. However, the two are chained together, so they must go together. Wanting to go back to prison, Bugs makes a couple of attempts to turn Daffy and himself into the cops, but fails both times. Once, at the diner, he gives a cop a note saying, "We're on the lam". However, the officer thinks that there's a discount on lamb, much to Daffy's delight.

Unable to afford another night at the motel they had been staying at, Bugs and Daffy end up crashing on the roof of a rest stop bathroom. It soon starts raining and washes the dye off the fugitives, returning them to their original colors. After lightning strikes and breaks their shackles, Daffy starts shouting that he is a wizard, which gets the attention of a nearby police officer, who promptly arrests them and sends them back to jail. A year later, the duo are released from prison and are picked up by Porky. Bugs starts crying because he does not want to leave jail. Daffy, having learned nothing, throws a soda can out the car window on their way back home, causing Porky to be pulled over by a cop (with Porky asking Bugs to hand him some pants).

Daffy, at the gift shop notices there are no Daffy nameplates, but there are Darvin nameplates.

Daffy then says "Darvin is the world's stupidest name!" next to a kid named Darvin.

Daffy then leaves a sad Darvin and his mother.

Bugs and Daffy ready to buy a soda and a Grand Canyon joke book.

Daffy has no money, leaving Bugs paying for both the soda and the joke book, much to his annoyance.

Porky, not noticing Bugs and Daffy left him talks about the Grand Canyon.

Bugs and Daffy return, as Porky continues to blab about the Grand Canyon, not noticing they left.

The park ranger tells Porky that if he doesn't put some pants on, he'll be going to jail too.

Bugs tells Porky a joke from his book, not caring that Daffy is being arrested.

The judge for Daffy's trial.

Daffy trying to coax judge that he is innocent.

A man watching the trial, reading the newspaper, instead of paying attention.

Daffy thinks Porky is lying in the courtroom, due to his stuttering.

Porky tries to hide his shame again, in front of the judge in the court.

Porky buys some pants from the gift shop.

Daffy spits soda on Bugs in the courtroom.

Bugs poses for his first mugshot.

Bugs poses for his second mugshot.

Bugs posing for the camera.

Bugs posing for the camera.

Bugs posing for the camera, along with police officers.

Crusher eats next to Daffy and Bugs in the jail cafeteria.

Crusher, about to clobber Bugs for insulting him.

Crusher plays innocent after the police notices that he was going to beat up Bugs.

Daffy thinks Porky hid a file in the cake he brought.

Daffy yells at Porky for not putting a file in the cake, unaware that an officer is behind him.

The officer puts Bugs and Daffy back into their jailrooms.

Bugs and Daffy look at Crusher, while looking for rocks.

Crusher drives his pickaxe into Bugs and Daffy's chain.

Crusher glares at Daffy for rambling.

Daffy turns his and Bugs' skin yellow, with soap, when they break out of jail.

The police officer sees no resemblance between the picture and Bugs and Daffy, even though he is wrong.

Bugs reveals to have gotten a tattoo in jail...

Daffy uses his "magic powers" to break the chain, which was really lightning.

Bugs and Daffy are finally caught by the police, to Bugs delight and Daffy's horror.

Porky drives Bugs and Daffy home, after they were released from jail, after one year.

Upon being released from jail, Daffy, once again, litters, by throwing a soda can out the car window.

Porky asks Bugs to give him his pants, once the police demand they pull over.

Visiting area of the jail.

Daffy calling on the phone, with Bugs relaxing.

A view of the key and Bugs and Daffy in the background.

Bugs and Daffy walking the halls of the jail cell.

Daffy wants out of the jail cell.

Bugs posing with the guards.

Retrieved from "https://looneytunesshow.fandom.com/wiki/Jailbird_and_Jailbunny?oldid=51598"
Community content is available under CC-BY-SA unless otherwise noted.