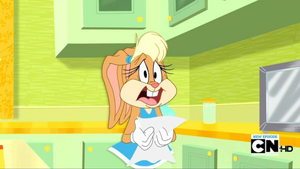 Dear John is the 38th episode of The Looney Tunes Show.

A group of firefighters rush to Daffy's residence, where he asks for help opening a tuna can. When one of the them frustratedly questions why Daffy called 911, Daffy notes that he called Bugs, Tina, and Porky before resorting to 911. Upon hearing this, the firefighers simply hand the can of tuna back to Daffy and leave. Elsewhere, Bugs and Lola watch a movie, and Lola cries when it ends. She is confused, so Bugs explains that the character in the end received a "Dear John letter," which involves someone dumping another person via letter. Now knowing what was going on, she decides to watch it again. Bugs stands up, and gives her the popcorn.

On a basketball court, Daffy talks to Porky about how the firefighters charged him money for them arriving at his house, and Porky tells him that he called them when he had no real emergency. Daffy insists they were valid, then flashes back to the "emergencies" he had. Porky informs Daffy that their emergency services are underfunded and overextended because property taxes are not high enough, then reveals that he is a part of the city council and is finishing up his third term. Daffy is amazed by this and asks why he never knew this, so Porky explains that Daffy never asks. And when he tries to tell him, Daffy interrupts him. And on the few occasions when Porky actually does get to say something, Daffy literally falls asleep because it's boring. Upon saying that, Daffy falls asleep.

At home, Bugs tries to microwave some food, but the microwave encounters an error as Daffy walks in and tells Bugs that he is leaving to go on a date with Tina. When Bugs questions the microwave's defectiveness, Daffy admits that the microwave isn't working because he put his metal can of tuna inside it, hoping it will pop the can open due to the heat. To this, Bugs informs Daffy that metal is not to be put in microwaves, and Daffy claims he already learned his lesson, only to return asking if metal can or cannot be microwaved. Bugs simply ignores Daffy's question and calls Speedy for his handyman, John, to fix the microwave. Speedy tells him that John will arrive the next day, then instructs Bugs to leave John a note. Bugs then writes a note reading "Dear John, This isn't working. -Bugs" on the microwave.

Lola arrives at Bugs' house while Bugs is taking a shower. While snooping around the kitchen, she encounters the note Bugs wrote and misinterprets it as a note for them to break up, then runs out, crying. Later, Daffy and Tina go to Sunset Room but find out that the restaurant is completely booked. Daffy informs the waiter that he is a close friend of Porky, which allows him and Tina to dine at the restaurant. Meanwhile, Lola packs her belongings to take a vacation, aiming to stop thinking about Bugs. In an attempt to keep insects out of her apartment, Lola puts a note on the door reading "Dear bugs, I don't ever want to see you again!" before leaving.

The next day at the basketball court, Porky discusses Daffy going around town claiming they are friends to get special treatment and in return having Porky treat them specially, such as name a street after someone or throwing a parade. Porky then claims such treatment is unethical and would make him look like he could be bribed, so Daffy assures him that it will not happen again. They then gather at Pizzarriba, where Porky sees one of Daffy's attack ads, which is to make Porky look like a corrupted official, including massive lies such as dumping garbage in rivers. Daffy admits that he is only running for city council so he can use his name to get special perks instead of using Porky's name. He then complains that Porky is a real flip-flop, then says that he'll use that in his next attack ad.

Lola decides to live in a monastery, which is located near a waterfall. Her monk tells her to meditate in order to get her mind off Bugs, then tells her that the key to meditation is silence and that she must not speak for the next year. Lola, however, has trouble keeping silent and wonders if whispering or sounds are allowed instead. Meanwhile, Daffy watches the news and finds out that he won the election for city council, then celebrates his victory while Bugs tries to call Lola, not knowing she has moved. He then leaves to visit Lola's apartment while Daffy plans on getting new business cards, thinking he will get them free of charge with his new power.

At Lola's apartment, Bugs finds Lola's note and thinks she broke up with him. Meanwhile, Daffy attends a city council meeting, where Granny files a complaint about the numbers on her curb and trying to paint over it. An uninterested Daffy questions the meeting's duration, worrying about if he will make it home in time to watch an Off Duty Cop marathon. The official beside him states that the meetings typically run for five hours, with some of them lasting longer. Granny continues by discussing the paint the city uses for addresses, much to Daffy's boredom. As the meeting continues on for hours, Granny concludes her speech, but the meeting continues when they discuss whether to install speed bumps or speed humps. When they ask Daffy for his thoughts on the situation, he loses his patience saying that everyone is insane and that they let Granny talk for 3 hours and she didn't say anything when he could have went to her curb and painted it himself in that timeframe. He also states that there is no reason to discuss for hours the difference being conical or ovoid, speed bumps and humps, respectively, and states that he has other things to do, then drives home, where he finds a heartbroken Bugs leaving the house for good.

Daffy and Porky meet at Pizzarriba, where Daffy describes having to sit through the meeting, which he found pointless. He then questions how much longer he has to tolerate the meetings, so Porky states that one term is four years long, making Daffy upset about all the meetings he will have to endure. Porky receives a shocking video on his phone, which is of Daffy going ballistic during the meeting. While Porky is not looking forward to Daffy's consequences, Daffy himself is. After Speedy notes that he saw that video, Daffy gets on the table and announces that he will accept being kicked out of office. Speedy and the other diners, however, commend Daffy for his outburst and claim he should be in forever, then Speedy discusses with Daffy where he can expand his restaurant, much to Daffy's anger. He remains on the city council for another year.

One year later, Lola's monk announces that a year has passed and that she may finally speak once more. Lola, however, is now beginning to miss Bugs, then takes off while laughing and making noises with her mouth. Meanwhile, Daffy is trying to decide where to put speed bumps when Lola arrives and searches for Bugs. Later at city hall, Daffy attends another meeting and gets a surprise visitor, Porky. He discusses "Prop 14," which is to make Daffy's seat on city council permanent because of his overwhelming popularity. Unwilling to be in city council forever, Daffy decides to fake his own death by driving his parade float off a bridge and into a river. Porky agrees to serve the remainder of Daffy's term, then plans out where to place the speed bumps and speed humps.

On the ocean during a rainy day, Lola catches up to Bugs, and they reunite. Lola admits that her note was literally meant for bugs as in insects, and Bugs reveals that his letter was for a repairman named John. They then kiss, and the clouds separate, revealing the sun. Later at the basketball park, Daffy tosses the ball too far and runs off to chase it. He finds a family admiring his statue, then claims "he was a great American hero."

Pete Puma appeared in the Merrie Melodies, but had no lines.

Retrieved from "https://looneytunesshow.fandom.com/wiki/Dear_John?oldid=50954"
Community content is available under CC-BY-SA unless otherwise noted.