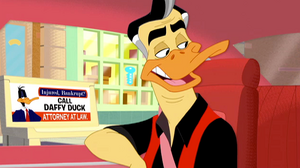 Daffy Duck Esquire is the 39th episode of The Looney Tunes Show.

The episode begins with Bugs about to enjoy some time in the pool. He is startled, however, when he finds dozens of lobsters living in the pool, which were a part of Daffy's never ending get rich quick schemes. Daffy explains that they will get him 50 bucks each. Then, he falls in the pool, getting mauled by lobsters.

Later that day, Daffy is in the middle of attempting to turn his bedroom into a nightclub (likely another money making scheme) when he receives a call from Tina. She tells him that her father is coming into town for a week, but he isn't going to be meeting him. Tina fears that her father (named Frank) will not approve of Daffy because he is unemployed, uneducated and has no money but Tina does not care and tells Daffy that none of those things matter to her, but they do to her dad. Tina picks Frank up at the airport and Daffy finishes setting up his "night club" by putting up a disco ball.

Bugs is about to take Daffy's lobsters back to the beach to release them, when he is almost hit by Lola when she pulls into his driveway. Bugs leaves and Lola goes to ask Daffy if he and Tina would like to do anything today, but he tells Lola that he's not allowed to see Tina for the week because of her Dad in town. Lola lectures Daffy that Tina is "A catch, he's lucky to have her and she isn't going to wait on him forever." She says if he wants to be with her forever, he's going to have to meet her father eventually if he wants to marry her in the future. Lola and Daffy come up with an elaborate plan to impress Frank, in the form of Daffy pretending to be an accomplished lawyer.

Meanwhile, Tina is taking Frank to check in at a hotel, and the topic of work comes up, which Frank eventually leads into talking about Daffy because "As far as I'm concerned, my daughter shouldn't have to work." Tina tries to avoid the subject by insisting that Daffy does "stuff" to which Frank translates as "unemployed". Tina tries to assure Frank that Daffy is a good guy but is interrupted when Frank notices an advertisement for Daffy's fake lawyer firm on a bench. He is immediately impressed and excited and says he wants to meet Daffy, to which Tina replies "He's probably busy being a liar, I mean, lawyer."

Tina takes Frank to Daffy's "office" where they meet Lola masquerading as Daffy's secretary, Tina gives Lola a dirty look (as if to say "What are you doing?") and Daffy comes out to meet them. They speak for a few moments and then Tina tries to get her father out of the office as soon as possible to avoid any further embarrassment, Daffy invites Frank to stay at his house (implying that Bugs' house is actually his) instead of staying at the hotel, which already impressed Frank agrees.

Bugs is at home, signing for more ridiculous deliveries of Daffy's, this time a full grown pony (which turns out to be a part of another money making scheme). Later that evening Daffy comes home and informs Bugs of the Frank situation, and begs him to play along with the ruse as he's afraid he'll lose Tina if he doesn't impress her father. Bugs agrees, and Daffy adds a last minute detail that Bugs also has to pretend that he is Daffy when Frank and Tina arrive and Daffy brings them into the house.

Tina drags Daffy off into the kitchen while Frank interrogates Bugs whom he thinks is a lazy unemployed deadbeat. Meanwhile in the kitchen Tina is freaking out, panicking that Daffy's lie has gone way too far, and is worried that Daffy is going to try to lie to her father for the rest of his life. Daffy insists that the lie is to protect their relationship, so that Frank would like him so he'd say yes when he asks to marry Tina, Tina almost immediately assumes he's going to propose, (again like in Semper Lie) but he assures her he is talking about down the road, when SHE has a better job to support the both of them.

Tina leaves the three of them and apologizes for not being able to do anything the following day because she has to work, Daffy assures her that he'll take care of Frank and that they'll hang out. But Tina slyly reminds him that Daffy has to "work", making him continue his lawyer ruse. This ends up with Bugs and Frank being alone in the house.

Daffy, bored out of his mind at his "job" is barged in on by Lola, telling him that he has his first client, Daffy panics and tells Lola that they weren't supposed to actually do anything at this fake office. The client is none other than Yosemite Sam, who is trying to sue Speedy's Pizzarriba because his pizza burned his tongue, which turns out to be because he just didn't blow on it, and Sam is just trying to sue him for the payout (possibly one of Yosemite Sam's get rich quick schemes).

On Saturday, Tina comes to see Frank and Daffy, but bumps into Daffy as he is leaving, Blinded by the possibility of a huge payout from Sam's lawsuit, he had agreed to help Sam sue Speedy, thus not being able to spend the day with Tina or Frank. Daffy insists that he's always been upfront about the sacrifices of his job, which Tina replies, screaming at him that "there's nothing upfront about this, and it's just a giant lie!" Tina ends up having to spend the day without Daffy. She goes into the back yard to find Frank and Bugs riding Daffy's pony, Frank asks the two of them to go have Lunch with him, in which Bugs ironically ends up taking Daffy's place.

The week progresses, showing Daffy and Lola getting increasingly wrapped up in their fake lawyering, and Tina being more and more upset of Daffy not being with Frank and her, surprisingly Frank is seeming to enjoy "Deadbeat" Bugs as much as he was Impressed by "lawyer" Daffy.

Daffy's lawyer con falls through the floor when Speedy's simple defense that "Daffy isn't a real lawyer." has them thrown out of court. Later that afternoon while Frank is packing his bags to return home, he tells Tina that while Daffy's occupation is impressive, he is concerned that He never sees her, and that she needs someone like Bugs. Daffy overhears this and sheds his Lawyer guise, telling Frank it was all made up, and that he is really the deadbeat roommate who buys Ponies and runs Lobster farms out of the pool, Frank is visibly furious that Daffy lied to him, but Tina defends him telling Frank that both she and Daffy were afraid that if Daffy was "himself" Frank wouldn't like him.

Frank says that as long as Tina loves him that's all that matters, turning to Daffy he asks him if he has any other secrets he's hiding from him, Without saying a word Daffy takes off his toupee. (which Bugs had actually revealed earlier, when reading Daffy's diary, pretending it was his own) Frank laughs at him and says "I'm watching him, but I like him." Tina kisses Daffy and leaves to take Frank home, Daffy rushes to tell Bugs the good news, and Bugs informs Daffy he actually had fun portraying him and that another of his packages has arrived, this time a killer whale in the swimming pool.

At the end of the episode, Daffy, Tina, Bugs, Lola, Sam and Speedy are partying in Daffy's bedroom at a nightclub.

Gossamer was mentioned in the episode, but was neither seen nor heard. Taz made a cameo in the epilogue without dialogue. 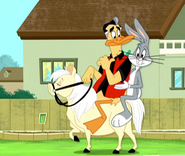 Tina driving on the wrong side of the road, in front of Copy Place

Retrieved from "https://looneytunesshow.fandom.com/wiki/Daffy_Duck_Esquire?oldid=50955"
Community content is available under CC-BY-SA unless otherwise noted.