" Good morning, Julie. Do you know why I'm smiling? Because it's Monday. And that's the day I randomly select one of our customers - and turn off their their cable. Let's see who's today's unlucky customer!"
—Customer Service 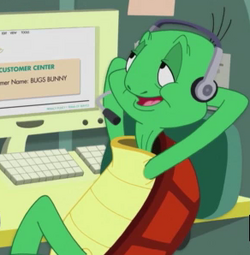 2
Season of the Turtle
Christmas Rules

Cecil Turtle is a character in The Looney Tunes Show. He serves as the main antagonist of Customer Service and The Shell Game.

Unlike the tyrannical, power-hungry Marvin, the scheming malevolent Sam, and the ravenous, intelligent Wile E., Cecil is considered goofy and stupid; unfortunately he also seems to hold considerable power despite his idiocy and thus can cause trouble for the show's heroes.

In Customer Service, Cecil Turtle, an operator for Transvisitron Cable, turns Bugs's cable off during a basketball game, to give himself pleasure. Bugs then calls Transvisitron Cable and lets Cecil know he wants his cable turned back on. Cecil Turtle maliciously mistakes his name for Buugs Buuny and asks Bugs if he wants to be upgraded to the Bronze, Silver, or Gold Package. Bugs gives him a hard time and then Cecil just laughs evilly at Bug's annoyance. Cecil then falls off his chair and calls Julie, another customer service representative, repeatedly for help getting back up. Bugs redials and connects with Daffy at his new job as the head customer service representative and also purposely calls him: Buugs Buuny. Daffy then reconnects Bugs with Cecil. Then when Bugs is waiting for his cable to be reconnected up, he has to quickly go to the upstairs bathroom, and Cecil puts a notice on his door. Bugs then decides to get revenge. At the coffee shop, Bugs dresses as a female named "Becky". When Cecil asks for a cappuccino, Bugs says they're out and "But we can upgrade you to a regular coffee." And Cecil states "I don't really know how that's an upgrade, but okay.". When Cecil mentions he's got to make it for work, Bugs states they're out of coffee. Then in the building up the elevator, Bugs dresses as an old bellboy telling Cecil all these crazy directions, so Cecil decides to just take the stairs. Cecil then was late for work, and Daffy fired him. Cecil appeared in his first Warner Brothers Symbol.

In The Shell Game, Cecil purposely walks behind Bugs' car with a cracked shell making Bugs believe that he crashed into him and broke his shell. He then recognizes him from Customer Service. Bugs feels guilty and gives him a check for $2,000 just to get into the doctor's. On the phone Cecil tells Bugs the fracture might be a little more serious than they thought. When Bugs goes to Cecil's apartment, Cecil comes out with just underwear on and gives Bugs a shopping list premade suspiciously because without a shell Cecil was "vulnerable."  When Bugs leaves, Cecil laughs maniacally into the audience, and Bugs asks the audience why he laughed like a cartoon villain. Bugs comes back with Cecil's worshipped "bubbly". Cecil makes a creepy Grinch face. Cecil pretends to be on the phone with the doctor, and says that they are looking at $53,000. However, when Bugs asks, he states the doctor doesn't speak English, when Bugs clarifies Cecil's talking English right now, Cecil states he knows English, he just can't speak it. Cecil then hangs up the phone immediately after they wrestle for it. When Bugs gets home, Porky bursts in devastated that he broke a turtle's shell, and he was full of guilt. Bugs then looked Cecil up online and found him in newspapers "accidentally" getting hit by a boat, bus etc, revealing that he is a con artist. Bugs and Porky then scare Cecil by both coming to his apartment. Bugs finds Cecil's shell, but before Bugs and Porky are able to turn it in to the police, Cecil then points a loaded gun at them threatening to shoot if they attempt to leave. Cecil made Bugs kick the cracked shell over to him, and shuts the door. Bugs convinced Cecil to lean back in Daffy's broken recliner he found, which threw him into the wall, breaking his second shell. He then presumably goes to jail. Cecil then appears in his 2nd Warner Brothers Symbol behind bars then making a Grinch face.

Cecil is a green turtle, with a middle-aged appearance, although it is unknown how old he actually is. (Even young turtles have wrinkles on their their skin.) He has three black hairs sticking out of his head.

Cecil, to put it mildly, is a jerk. He is quite the trickster as every Monday, he has a sick thrill of selecting a random customer and turning their cable off (He works as a customer service representative). When the customer calls in to get their cable turned back on, he makes the process as painful as possible.

Cecil takes considerable delight in inflicting misery upon others, simply because he can. He usually has a smug smile plastered across his face.

As it turns out, Cecil has no qualms against breaking the law, scamming others out of their hard earned cash, by pretending to be injured or even murder, as is revealed when he turns a gun on Bugs and Porky in 'The Shell Game'.

Basically, he is a psychopath.

Bugs getting revenge on Cecil, by pretending to be "Beck" from Coffee Hut.

Tina socks Cecil in the chest.

Cecil with a fake broken shell. 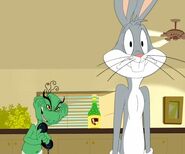 Cecil in the end credits