The Looney Tunes Show Wiki
Register
Don't have an account?
Sign In
Advertisement
in: Episodes, Season One Episodes, Episodes animated by Toon City

Bugs & Daffy Get a Job

Bugs & Daffy Get a Job 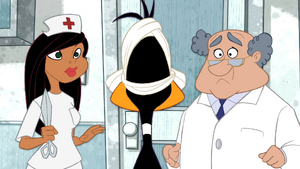 Bugs & Daffy Get a Job is the 15th episode of The Looney Tunes Show.

The episode begins at night, when Bugs is exhausted because he cannot sleep, due to Daffy's loud snoring. The next morning, Bugs takes Daffy to the doctor. The two then realize Porky works in the same building. Bugs visits Porky in the latter's office, and explores Porky's work environment and is intrigued by the office supplies. Hearing that nobody occupies the neighboring cubicle, Bugs gets an idea. Meanwhile, Daffy seeks medical help for his snoring by visiting Dr. Weisberg. Daffy learns he has a deviated septum and a bump in his beak—the latter leads Daffy to believe he is hideous. Seeking further advice about the bump, Daffy asks Bugs about the bump, but Bugs claims he never noticed. When Daffy asks Tina, she claims the bump was the first thing she ever noticed about him, causing Daffy to panic. Everywhere Daffy runs, he hears the word "bump," inundating Daffy with further worry.

While working, Porky then notices Bugs peering over the wall—Bugs now works in the formerly vacant cubicle. As Porky struggles to work on his forms, Bugs distracts Porky by causing a commotion, and in Dr. Weisberg's office, Daffy discusses with Dr. Weisberg the procedures to be performed on his beak. Against Dr. Weisberg's advice, Daffy requests that a drastic procedure be done as soon as possible.

The following day, Bugs prepares to cause even more chaos at work. A bandaged Daffy meets with Bugs; Bugs compliments Daffy for not snoring. Daffy looks forward to his bandages coming off, ready to flaunt his new appearance. Afterward, Bugs repeatedly pesters Porky by asking to borrow office supplies; this leads to the rabbit making a doll out of the office supplies and bothering Porky with the creation. Now angry, Porky claims fun is not to be had at work. Bugs questions why Porky wants to be miserable at work, stating the average person spends one-third of his or her life working—eventually, Porky relents as Daffy, meanwhile, has his bandages removed. Upon seeing himself in a mirror, he believes himself to be "gorgeous."

Porky and Bugs continue to goof off in their office while Daffy shows off his new appearance to anyone he encounters. The people who see Daffy are baffled—and not in a positive way. Confidence level high, Daffy arranges a date with Tina, and then, he reveals to her his new appearance—a considerable portion of his beak has been removed (making it two inches long), exposing the top row of his teeth. Tina considers Daffy's makeover a fiasco, claiming he now looks crazy, and adds that she liked his old appearance better. Not relenting, Daffy insists the bump on his beak was an imperfection, to which Tina responds by stating she likes Daffy's imperfections, claiming they are what give him his personality. But Daffy thinks differently and thinks that Tina is jealous of new "perfect" beak and insults her own beak, causing Tina to punch him right in his face. He then goes to get his procedure reversed.

Later, Porky reveals he had spent hours on a non-constructive project; by now, the pig is shaking and losing sanity. A cautious Bugs tells Porky he is taking the "fun at work" principle too far, and asks about the reports on which Porky was supposed to be working. Now panicked, Porky rushes back to his cubicle, retrieves the reports, throws them into a shredder, and dumps the remains over his supervisor, laughing in doing so. Fed up, the supervisor fires Porky while Daffy undergoes another procedure to reverse his earlier one.

Packing his belongings, Porky comes to a realization—he now believes life is too short to have a job he dreads. He then dreams romantically about his future job against Bugs' advice. As Daffy catches up with the duo, a comment from Porky about Daffy's bump sends Daffy into a crying fit.

...even if he tries to cover his ears with his pillows.

So, Bugs goes into Daffy's room...

...even if he has to slap him repeatedly.

Bugs realizes that Taz moved him back.

"Do you have to sigh so loudly?! I'm trying to sleep!"

"How is standing on the ledge of a high-rise building going to help fix my snoring?"

Bugs and Daffy in the waiting room.

Daffy hoarding recipes from a magazine.

Bugs is intrigued by offices supplies...

...and a tape dispenser.

Porky is not amused by Bugs' foolery.

Daffy sees a bump on his beak.

Daffy intends on stealing a toilet from the office.

...Daffy interrupts Tina to ask about the bump.

Tina claims the bump was the first thing she noticed about Daffy.

In response to one of Daffy's claims, Tina claims Daffy is "nothing but imperfection."

Daffy does not react well to the word "bump."

While Porky was doing his job...

...Bugs asked him if he has a second.

Bugs tells Porky to work and have fun at the same time.

Porky makes a chandelier out of paper clips.

Bugs and Porky roaming their work.

Porky makes an uniform out of sticky notes.

...and they got stuck to his head.

...and shows her how short his beak is.

Tina punches Daffy after he insulted her.

Porky continues having fun at work and consequently gets fired.

Dr. Weisberg appears about the credits.