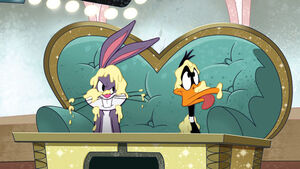 Best Friends is the premiere episode of The Looney Tunes Show.fa

The series begins with Bugs Bunny and Daffy Duck watching a game show. Daffy plays along with the show, getting simple questions incorrect. Lamenting about how he's never won anything, he decides that he should go on a game show himself. Daffy sees an advertisement for the show Besties, which quizzes the contestants on their knowledge of their best friends, and convinces Bugs that they should be on the show. The next day, Daffy manages to get the duo on the show, but Bugs expresses his concerns that Daffy will do poorly because he doesn’t know anything about anyone besides himself. Bugs asks Daffy basic questions about himself, but Daffy doesn’t know any of the answers. Bugs tries to prepare Daffy for the show, but he doesn’t listen, so Bugs starts telling the origin story of Superman, which gets Daffy’s attention, but causes him to think that Bugs is actually Superman.

On the show, Bugs and Daffy end up competing against Mac and Tosh, who seem to know everything about each other to a ridiculous degree. This scares Bugs and Daffy, and annoys Chuck Berost, the host, at one point of the show. Daffy gets the first question incorrect, and causes Bugs to answer his question about Daffy's middle name incorrectly by changing it to Armando, because it sounds cooler than his actual middle name, Sheldon. Bugs decides a new strategy is in order, so he tells Daffy to start saying the opposite of whatever he thinks the answer is. This results in Daffy answering the next several questions correctly, which puts Bugs and himself in a position to win after the gophers miss the last question. This opens doors for Bugs and Daffy after being 100 points away from winning. Daffy is asked, "What's Bugs Bunny's catchphrase?" Obviously being 'What's up doc?', Daffy chooses 'I don't do Monday's'. Daffy and Bugs are slingshotted out of their chairs as punishment for their incorrect answer, and are stuck in the roof. Bugs kicks Daffy for getting the question wrong. Meanwhile, Mac and Tosh get a prize on a cruise.

Once home that night, Bugs tells Daffy that they aren't friends. After Daffy spends the night in Bugs' car, Speedy tells him that he needs to be a better friend to Bugs, because Bugs is his only friend. Daffy takes the advice, and decides he’s going be the best best friend ever. He takes Bugs on the same cruise Mac and Tosh won on the show and starts regurgitating various details about Bugs's life. He also does ridiculously nice, but extremely annoying things like celebrating 189 days till Bug's next birthday. All this does is make the rabbit even angrier. Later, after Daffy gives a disturbing toast to Bugs and best friendship in the ship's dining area, Bugs tells Daffy that he is acting more like a stalker than a friend, and that he prefers the old Daffy, but also adds that he is still Daffy's best friend for reasons he doesn't really understand. At the end of the cruise, Bugs asks Daffy how he paid for everything. Daffy then reveals that he does know something about Bugs after all, his credit card number. He starts reciting the number in public, but Bugs stops him before he can finish.

Daffy is frightened by seeing Speedy Gonzales, mistaking him for a rat.

Baby Bugs next to a crystal carrot.

The host of Besties, Chuck Berost.

The winner of Besties is rewarded with a fabulous cruise.

The correct answer for "what is your friends' favorite food?" is pureed butternut squash in a balsamic reduction with just a hint of clover.

Mac and Tosh share a good luck handshake with each other.

Daffy tries to guess what Bugs' catchphrase is, which is actually, "What's up, Doc'?"

The correct answer was "What's up doc?"

Mac and Tosh win the game by 100 points.

Bugs and Daffy get ejected from their seats.

Bugs and Daffy's faces are seen above the building.

Daffy makes fun of Bugs' catchphrase, and claims that he has never heard Bugs say it before.

Daffy needs to try 100 percent to be Bugs' best friend.

Daffy is surprisingly celebrating 189 days until Bugs' birthday, scaring him in the process.

Daffy jumps in front of Bugs when he goes down the waterslide.

Daffy tries his best to get on Bugs' good side.

Bugs says he doesn't want him and Daffy want to be like Mac and Tosh, since they are eerily close, and says "No offense."

Mac and Tosh both say "None taken."

Bugs claps a hand over Daffy's face to make him stop announcing his credit card number. 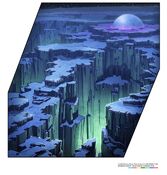 The backstage of the Besties set.

The rooftop of the Besties set.

The neighborhood, as seen in the end of the episode.
Retrieved from "https://looneytunesshow.fandom.com/wiki/Best_Friends?oldid=51057"
Community content is available under CC-BY-SA unless otherwise noted.