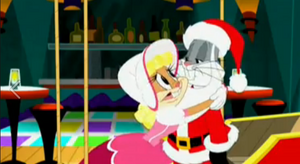 A Christmas Carol is the 36th episode of The Looney Tunes Show.

Near Christmas, a heatwave is in effect, but Lola is cheerful and warmly dressed while Bugs seems indifferent, thinking it is too hot for Christmas. When Bugs admits his true feelings, Lola feels like she will soon faint, only for Bugs to note that it is merely heat exhaustion, so she takes off her coat and hat and feels better. However, when Bugs notes that he does not feel like celebrating Christmas this year, Lola does indeed faint. Later on, Elmer, doing a news report, says that the heat wave will continue on, then gives a comparison of a snowy Christmas the previous year versus an extremely hot one currently experienced. Yosemite Sam notes that his Christmas trees are not selling as one of them ignites due to the heatwave. A disgusted Lola does not like how so many people are giving up on Christmas, then decides to put on a Christmas carol to put everyone back in spirit. Bugs hands her a book called A Christmas Carol, and she leaves, only to faint due to heat exhaustion because she is wearing wintry clothing in such hot weather.

Daffy is in the kitchen attempting to put himself inside the fridge, but Bugs warns against it, noting that he will suffocate. They then watch the news, where Elmer announces that Foghorn is holding a press conference to save Christmas. He shows the idea of putting a gigantic fan on top of the North Pole, hoping that it will bring the cold air to their neighborhood. Daffy goes to leave for the North Pole when, in the process, he encounters an exhausted Lola and announces that she fainted. After Daffy leaves, Lola gathers Porky, Sam, Bugs, Speedy, Mac and Tosh to the movie theater, where they will practice the script for A Christmas Carol. She admits that she rewrote it, then hands out the scripts, which involve people completely unrelated to the original story.

Above the North Pole, Daffy and Foghorn drop off the fan and jump off the plane. While transporting the box containing the fan, Daffy faints, giving up due to the North Pole's frigid air. When he sees Foghorn struggling with the box, however, he gets back up and helps him. Meanwhile, Lola and her castmates rehearse their lines, but Lola struggles with her lines. Back at the North Pole, Daffy and Foghorn finally arrive and celebrate, then assemble the giant fan, only to ponder on where to plug it in. Foghorn decides to plug it in Santa's workshop, but when they walk while trying to find it, they start freezing. Elsewhere, Lola and the others continue the rehearsals, but Lola still has trouble with her lines. Bugs, holding the script, tells Lola her lines, making Lola think Bugs has commit the script to memory. When they finish, Lola excitedly claims it will be the best version of A Christmas Carol ever, but one of the gophers has his doubts.

Around the North Pole, Daffy and Foghorn are trying to walk but are hindered because of a strong wind. Daffy runs into a cave, thinking it is Santa's workshop, only to be told by Foghorn that he is hallucinating and has hypothermia. Daffy nonetheless runs in the cave, where he sees many Christmas decorations and eventually finds Santa, who offers him some hospitality. Afterward, Daffy and Foghorn go back to their neighborhood and hold another press conference, where one of the attendees questions if the enormous fan at the North Pole will help cool the city, drawing an affirmative from Foghorn. The same attendee then asks how they did it, and Daffy tells them that he met Santa Claus, then plugs in a tape to show evidence. The tape, however, shows that Daffy was indeed hallucinating, for he was actually in a cave with a polar bear and its cubs. Daffy notes that the fan was never plugged in, and Foghorn admits that the next fan he makes will be battery-operated.

At the movie theater, a crowd gathers to watch Lola's play, much to her excitement. She and the others group hug, then fall into a trap door, which Lola installed but failed to warn the others about. Since there is no other way to exit, they call to Bugs for help, but he struggles to open it, leaving the only option to cancel the play. Instead, he dresses up for the play and plays all the parts as Daffy and Foghorn stop by the theater and decide to watch it. Bugs falls through the trap door while Santa Claus arrives and talks about Christmas. He is then about to deliver the presents just as he falls through the trap door and deems Sam naughty while rewarding everyone else. Afterward, Daffy and Foghorn exit the theater and find that it is snowing, and Santa reveals that he plugged in their fan, which effectively cooled down the city. 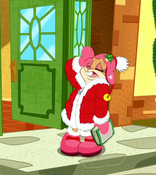 Retrieved from "https://looneytunesshow.fandom.com/wiki/A_Christmas_Carol?oldid=50952"
Community content is available under CC-BY-SA unless otherwise noted.